1976 – Today. Pushing the boundaries of design. Motta di Livenza, a small community in the region of Veneto in Northeast Italy is the birthplace of Magis. For centuries this region has been known for its remarkable craftsmanship, creativity and flourishing trade. In the heart of this vigorous area Eugenio Perazza brought his vision of a modern design company into reality: a place of genuine freedom to explore. A place where real design and technological innovation go hand in hand to enrich people’s life with beautiful, useful and authentic products. The company’s name embodies this idea. Magis is a Latin word that means “more than”. This philosophy is reflected in every Magis product. By constantly experimenting with new design languages, new technologies and new materials, Magis is always more than ordinary or expected. Guided by this mission Magis achieved critical and commercial success, and became one of the most influential international design brands. In 1996, family members Barbara Minetto and Alberto Perazza joined the company. In the best sense of the word, Magis continued to be a family business: independent and run on family values. Appreciation, loyalty, respect and a great sense of community are the building blocks of all relations with employees, designers and partners of Magis. Magis moved to new headquarters in Torre di Mosto in 2010. On a site of around 98,000 m2, it provided a new home for the logistics and assembly departments as well as all the offices. A spacious showroom means visitors can see an exhibition of iconic Magis products and get a sense of what Magis stands for. In 2016 Alberto Perazza was appointed CEO of Magis. This natural transition has led to a new chapter of Magis, while still staying true to its core value: being the creative and progressive voice of design.

LINNUT (the FINNISH WORD FOR BIRDS) is a collection of birds developed in collaboration by Magis, Iittala and Oiva Toikka, starting from the collection Birds, the blown glass birds designed by Oiva Toikka for Iittala since the ‘70s. This time the birds are made of rotational-moulded POLYCARBONATE, a material allowing to create an effect very similar to the rich finish so typical of blown glass. Sulo, Siiri, Kirassi and Palturi (the names of the birds) are movable cable-free light sculptures. 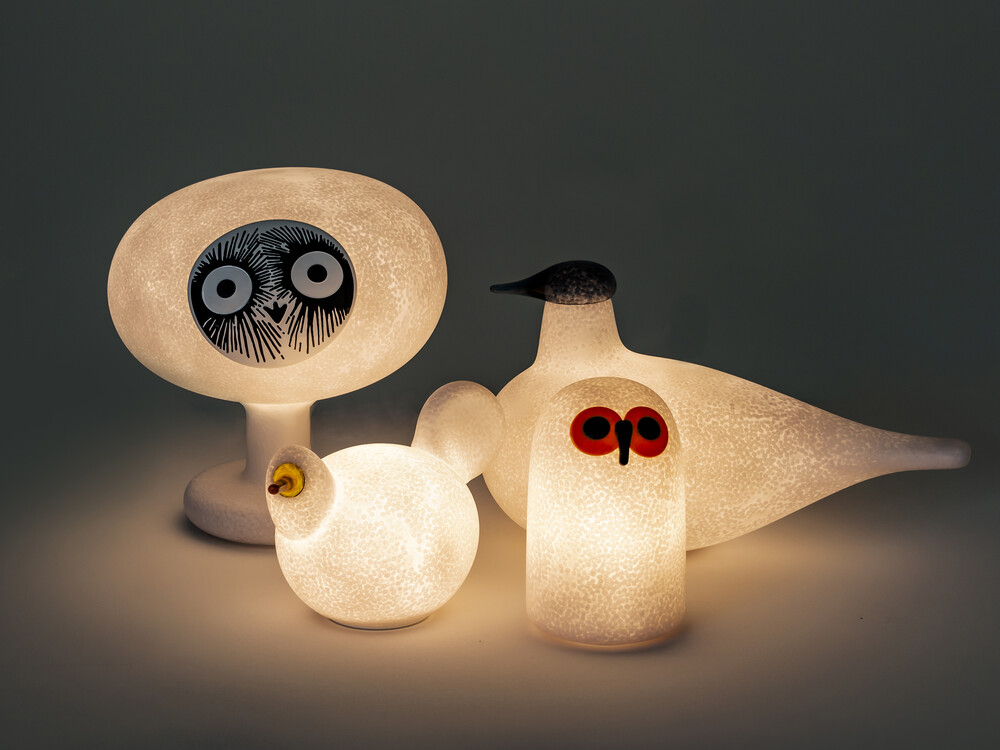 Professor Oiva Toikka (born in 1931) is one of the greatest names in Finnish glass. His imaginative, rich, bold glass art deviates from the streamlined aesthetic of Nordic design. Oiva Toikka is renowned worldwide for his unique and massive contribution to Finnish art glass over the past half century (the Birds Collection for Iittala is his best-known work. The pieces are renewed annually, and are highly sought after as gifts and collector’s pieces). He has enjoyed an international career and received numerous awards, among them the Lunning Prize, Pro Finlandia Medal, World Glass Now 85 Award, Kaj Franck Design Prize and the Prince Eugen Medal.

In addition to glass and ceramics, Toikka’s career has covered many other areas, including stage costumes, drawings, and textiles. In these last years, Toikka has also begun a fruitful collaboration with Magis, resulting in three products made of rotational–moulded polyethylene (the rocking bird Dodo, the colourful coat stand Paradise Tree, and the shelving system Downtown) and a couple of serigraphs, called Moments of Ingenuity. Oiva Toikka is an artist of immense creative talent, vision and versatility, the creator of elaborate compositions and installations, all drawn by an impulsive imagination that seems to ignore boundaries and pays scant regard to aesthetic coherence.